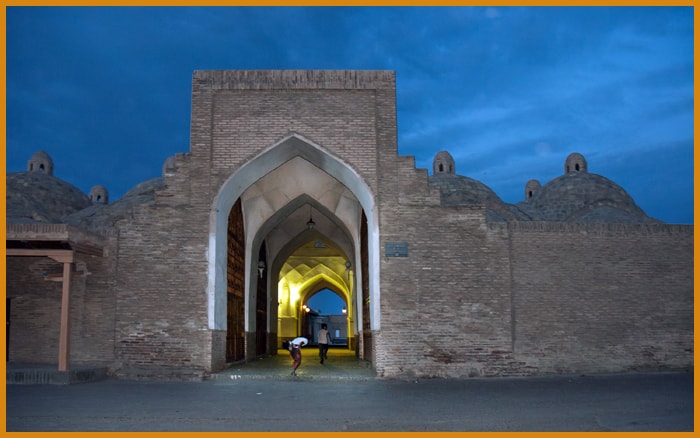 Day 1: Tashkent- Nukus
You will take a flight to Nukus to start your Wind of antiquity tour. The whole day will be spent in a guided city tour. You will stop by the museum which holds the drawings that were forbidden back in the times of the Soviet Union, you will also see such locations as the Mizdakhan necropolis, and 2200 year old Zoroastrian monument. You will then spend your night in the hotel.

Day 2: Nukus - Khiva
In the morning, you will travel to Khiva. Being the oldest city on the territory of Uzbekistan. You will walk along the streets of the inner city which has still preserved its state with the 400 traditional dwellings, 60 monuments and other types of historical artifacts. The most important locations are the 17th fortress Kunya-Ark, the Kalta Minor minaret, the Tash Khouvli palace and Khozem 1830 architectural monument. You will then spend your night in the hotel.

Day 3: Khiva - Bukhara
Next morning you will be travelingto Bukhara. Many historical monuments have made a museum out of the city. The road that you will be taking will go through the Kizilkum desert and along the Amu Darya river. Upon your arrival to the city, you will have some free time in the city. The night will be spent in the hotel.

Day 4: Bukhara
In the morning, you will start your city tour around  Bukhara. The city of Bukhara has been there for a long time. Its narrow streets that stand there since the Middle Ages lead the tourists from one historical location of one era to another one that was belonging to the next era. From 4th  to the 16th century and into the modern-built mosque of forty columns, you may wander around those monumental buildings that once housed dynasties of rulers within their walls, the mosques and other significant holy places. The gorgeous buildings covered in blue paint had been decorating the brochures of Uzbekistan for a long time. After visiting all of the gorgeous buildings, you will end your tour by visiting the complex that was built between the 12th and the 16th centuries which is composed of a minaret, a madrasah and a mosque. You will then be spending your night in the hotel.

Day 5: Bukhara - Yurts camp of Nurata
This day you will be traveling from Bukhara to a very small Nurata town. Even though the archaeologists state that the land in that area was formed 40,000 years ago, the legend states that the city was built around the times when Alexander the Great has built a fortress Nur in that area in 4th century BC. The city is filled with different workshops, mosques and madrasah. Apart from everything else, there is a sacred pond which pilgrims visit during their hajj. Your  tour will end by visiting the Alexander the Great's fortress. In the end of the day you will be driving to the desert in order to spend your night in a yurt camp there.

Day 6: Nurata - Samarkand
The next morning you will drive to Samarkand. The city is not only one of the biggest cities in Uzbekistan, but also it was created the same time as the great city of Rome and Babylon. One of the most important places of the city is the Registan square the area of which is taken by three madrasahs, they were built around 15th - 17th centuries. Another point is the site of the UNESCO World Heritage which is the collection of tombs which date back to around 11th - 15th centuries. The last destination point during the tour will be the Bibi Khanum Mosque, it was built in the favor of Tamerlan's wife after his success in India. You will then spend your night in the hotel.

Day 7: Samarkand - Tashkent
The following day you will travel on a train back to Tashkent. The day will be dedicated to the city tour. You will see how the old city and the traditions of the Central Asian countries have helped its development and now it has become not only the country that is filled with the Middle Age history, but also with nice architectural masterpieces that date to our century or maxim the previous one. For example, the metro which was built back in 1977 is considered to be one of the most beautiful ones out there. In the end of the day you will be visiting the Othman Quran. It dates back to 8th century the pages of the holy book are covered in the drops of blood which are believed to belong to the owner, Caliph Othman, who was the owner of Quran -one of the four successors and first followers of Prophet Mohammad. You will then spend your night in the hotel.

Day 8: Tashkent - Flight
In the morning you will be transferred to the airport.