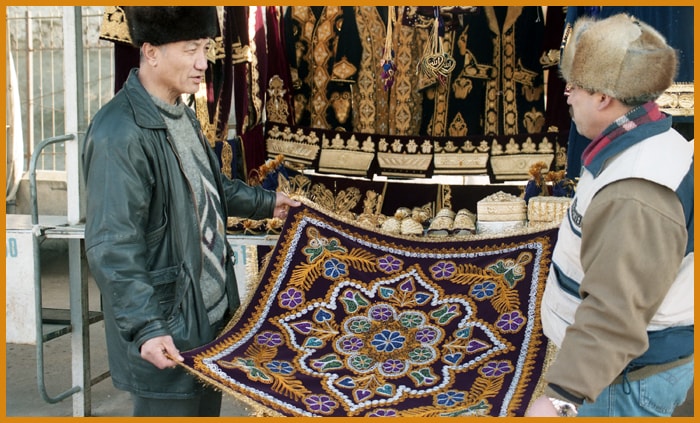 Day 1: Tashkent
Today you will explore the best sights of Tashkent. And the first highlight will be Independence square which is the main square of the country. Place of slow walks, favourite by townspeople among freshening streams of poured fountains and green avenues.In course of the tour you will  observe the local Broadway, along tourist street last numbers of artists and national craftsmen. They offer travelers handwork souvenirs. After you will have a chance to take a ride in famous Tashkent metro, among the most beautiful subways in the world. All stations have the unique architectural shape: marble, granite furnish, numbers of columns, colourful bas-reliefs.After you will discover important sightseeing such as: Chorsu Bazaar, Kukaldash Madrasah- the largest madrasah and one of the most known historical monuments of Tashkent and Hast Imam complex that consists of several madrasahs, mosques and mausoleum. The highlight of its exhibits is the Othman Quran which is the world's oldest Quran copy dating back to 8th c. The most ancient manuscript which has remained up to now of the Quran empurpled as believe by blood of the third Caliph - Othaman. Night is in a hotel.

Day 2: Tashkent - Bukhara
There is the option to transfer (flight or train) to Bukhara. Bukhara - the surprising city which has kept ancient history in set of architectural monuments: mosques, madrasah and palaces. In course of the tour you will visit the best highlights of this sacred city. You are going to visit the Citadel Ark - an ancient citadel in Bukhara (modern Uzbekistan), a stronghold of last emirs. In due time Ark towering over the square Registan, was a symbol of greatness, the power and inaccessibility. After in the tour you will see Samanids mausoleum, is the most ancient monument of Islamic architecture a real masterpiece. Then the tour continues to Chashma Ayub, that is translated in Persian as «the Source of Iova», consists of a tomb and a spring which is considered to be sacred. You have a chance to walk along the shopping domes and visit one of the most famous madrasahs of Bukhara -Nodir Divan Begi. You will conclude your tour with visiting Poi Kalon complex. It consists of three structures built in the 12th - 16th centuries: Kalon minaret, Kalon mosque and Mir Arab Madrasah. Kalon - «the Great minaret», being the main jewelery of a complex.  Kalon is one of the central architectural ensembles of Bukhara. Night will be in the hotel.

Day 3: Bukhara
You will a wonderful opportunity to wander around the remarkable sights of the city. First you will visit Bahauddin Naqshbandi complex, the cult ensemble in a residential suburb of Bukhara . It is a memorial complex of famous Sufi Leader and Philosopher, one of the Muslim pilgrimage places for all people of Islamic world. The memorial complex is constructed on a place of a burial place of the known, spiritual instructor Tamerlana living in XIV century.  Everyone, visited this place, the believing or usual tourist, will necessarily note tranquility of this place. Today complex consists of mosques of Kushbegi and Muzafarohana, courtyard with pool, madrasah, and burial vault. In the tour you will drive to see the countryside residence of Bukhara Emirs named Sitorai Mohi Hosa complex. The palace complex of Sitorai Mohi Hosa has settled down in five kilometres from a city of Bukhara.  In the end you will explore Chor Bakr memorial complex. Unique Nekropol Chor-Bakr (XVI-XVIII-th century) is in the southwest from a city of Bukhara, in settlement Sumitan. "Chor-Bakr" means «Four brothers», but abroad it name «the City of dead ». The necropolis represents the big architectural complex brought in the catalogue of UNESCO.  After excursions you will return to city. Overnight is in a hotel.