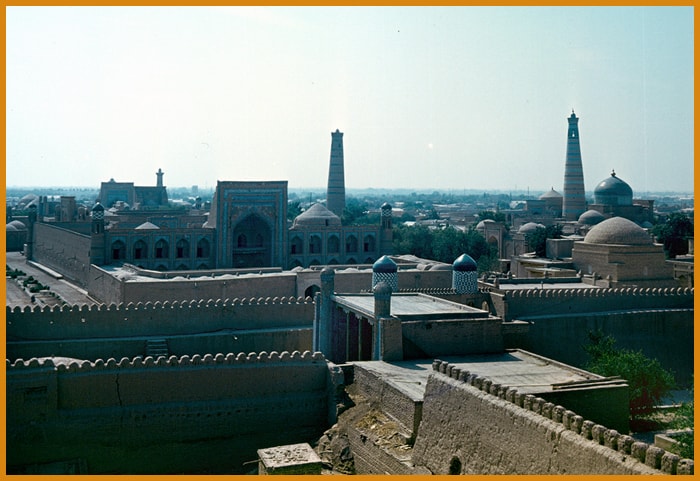 Day 1: Tashkent- Nukus
Today you will fly straightly to Nukus. Karakalpakstan, and its capital Nukus - the  most extraordinary tourist directions in the world. In course of the tour you will discover the highlights of the city.  Your first sight will be the Museum of Savitsky, the largest in territory of the Asian region. The Nukus museum has created  Savitsky Igor Vitalevich. Magnificence of numerous shop-windows with jewels of Karakalpak, and also their neighbours - ethnic brothers - Uzbeks, Turkman and Kazakhs, is presented in magnificence grasping spirit against woven strips.Museum collects 20th century Russian avant-garde paintings, works of Sokolov, Komarovskiy and Amaravella group. In a museum are collected not only avant-guarde painting and a drawing, but also archaeological exhibits and a unique ethnographic collection of subjects of a life and material culture of Karakalpaks. In the tour you are going outside of Nukus to visit Mizdakhan necropolis. The grandiose ancient  architectural complex of Mizdahkan is on the hills located along large main ways, conducting to a plateau Ustyurt and Muinaku. Night will be in a hotel.

Day 2: Nukus - Ayaz Qala - Tuprak Qala - Khiva (290 km, 6 hours)
The tour starts with moving to ancient Khiva, is perfectly remained city-oasis near to Karakum desert nearby to Khoresm. Khiva -is very ancient city. In X century it is mentioned as large shopping centre on the Great Silk way. Khiva - the unique city applying for a rank of "the Seventh miracle of the world». It is the present museum open-air, with perfectly remained ancient architecture and protogenic beauty. Now we have most of this unique city preserved and cherished to pass to our next generation. On the way we will visit two famous fortresses: Ayaz Qala and Turpak Qala. The complex of Ayaz-Qala is interesting that here there are not strengthened rural settlements. The name in transfer means "the Fortress on a wind". Tuprak Qala, means ‘clay fort', was the royal city of Khorezmian ruler Artav.The Turpak-Qala represented large site of ancient settlement which existed on plain at slopes of Sultanuizgad in I-IV a century of AD.  Night is in a hotel in Khiva.

Day 3: Khiva - Urgench - Tashkent
Today the tour starts with the best sights of the city, in the oldest city of Uzbekistan. It will be inside of Ichan-Qala - defensive works, the real city-museum. Historians date first settlements in territory Ichan-Qala IV-III centuries BC. Long time settlement was a fortification for defence against attacks of nomads. Subsequently Khiva had strategically important position, as one of cities-oases on the Great Silk way. Another highlight the Kunya-Ark fortress. Kunya-Ark (in transfer «the old fortress») is a citadel of the governor which was in each big city, Kalta Minor minaret,  is considered to be the lowest and short tower in the city of Khiva and Tash Khouvli palace, an incredible sample of Khorezm architectural mastership of 1830s. In the end of the tour you will fly to Tashkent. Night is in a hotel.