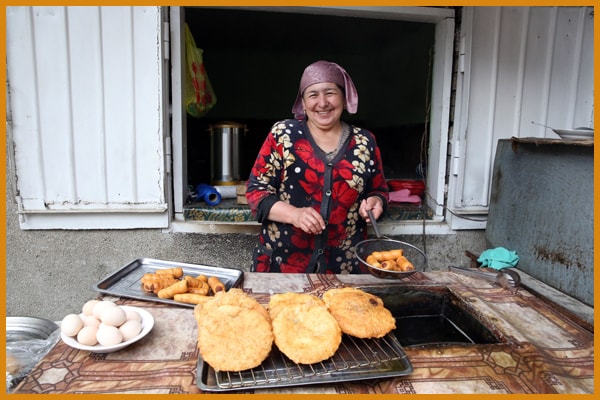 Day 1: Oibek border - Samarkand
Upon arrival, your guide will meet you at the border and drive to city of Samarkand to start your tour in Uzbekistan. Samarkand is the biggest city after Tashkent and located in the Zafershan river valley. Moreover, it is coeval with the world's oldest cities like Babylon and Rome. Whole day will be devoted to see most attractive sites of the city. Starting with Registan continuing to hakhi-Zindeh, Mausoleum Guri Emir and Bibi Khanum Mosque. Registan is a lovely square between three admirable Madrasahs, which were built in 15th-17th centuries. The beauty of these medieval architectural monuments will charm everyone who visit Registan. Another historical heritage of UNESCO World Heritage Site is Shakhi-Zindeh complex. It consist of large storage of mausoleums constructed during 11th-15th centuries. Completing traveling point will be the mosque of Tamerlane's wife - Bibi Khanum Mosque. This mosque was built for the honor of his wife after his victorious fight in India. Overnight in a hotel in Samarkand.

Day 2: Samarkand - Tashkent (transfer or train)
After breakfast at the hotel, morning train will take you to travel in a capital city of Uzbekistan. Today you will discover all sites modern and old Tashkent city.  Your tour will start from the monument of victory over fascist Germany in the Second World War- Independent Square. Later you will enjoy walking on the Broadway. This way leads you to the Amir Timur Square. Then the most remarkable part of the day comes: you will explore old part of Tashkent. Vibrant and colorful Chorsu Bazaar, old Kukaldash Madrasah, and many madrasahs, mosques and mausoleum in Hast Imam  Complex. Next is most important heritage of history, Othman Quran. It is the most ancient copy of Quran in the world. According to researchers it daiting back to 8th century and owned by Othman Ibn Affan. He was one of the four Caliphs who came after the prophet Muhammad. During 8th century he was assassinated by his non-muslim enemy. Nowadays, it is possible to see the his blood stain spread on the sheets of holy book. You will spend your night in a hotel.

Day 3: Flight
Today you will end you short tour and leave to the airport. End of tour in Uzbekistan.