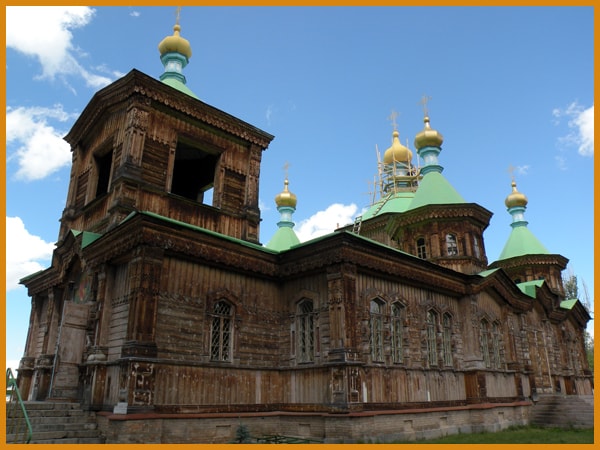 Day 1: Bishkek - Ala Archa - Bishkek
After arrival at the airport, meet your guide to start your tour and drive to the capital city Bishkek. It will take about half an hour to get to the city. Bishkek is located at the northern part of the Kyrgyz Ala Too range and it provides a beautiful background to the city. Today you will explore the city before lunch. The Victory Square will be the start point, it was erected to the honor of the victory of USSR over Germany in World War II. Later you will enjoy walking in old Oak Park and main Ala Too Square, Old Sqaure, House of Parliament. In the afternoon, will travel to the nature. It will be the National Park Ala Archa in the gorge with the same name, famous all over in Kyrgyzstan. It is the perfect destination for short hikes, only 40 minutes of driving from Bishkek. The park is rich in flora and fauna. We will take shortest walk to enjoy the panoramic view. Later after the tour drive back to Bishkek and rest in a hotel.

Day 2: Bishkek - Burana - Issyk Kul northern shore
Today you will start our travel to the second biggest alpine lake of the world and the first in Kyrgyzstan. Issyk Kul is famous as the "pearl of the Tien Shan", due do its location between mountains. More than 70 revers flow into the lake but no one is flowing out. In translation the name of the lake means ‘warm lake', it is because of its salty water. Sometimes it is believed to be useful for some diseases. En route to Issyk Kul, we will stop near the Tokmok city to make a tour Burana Complex. It is where medieval city Balasagyn was flourishing during the 11-12th centuries. The collection of old Turkic grave stones are an interesting monument of the complex. Night in a hotel near the lake.

Day 3: Issyk Kul lake - Karakol
After breakfast at 8 am, we will drive along the northern shore to Karakol city to continue your tours. But before heading to the east, you will visit the second largest collection of petroglyphs in Kyrgyzstan. Petroglyphs of Cholpon Ata located near the mountains and has different stone paintings dating back to 800 B.C, one of the main historical monuments of Kyrgyzstan. According to some resources, they were depicted by shamans 2000 years ago. After arrival to Karakol, we will visit architectural monuments like Chinese style Dungan Mosque and Wooden Church of Holy Trinity. Night in a hotel.

Day 4: Karakol - Jeti Oguz - Issyk Kul southern shore - Bishkek
Today will be most delightful drive along the southern shore with some stops on the way. The first will be Jeti Oguz Gorge. Famous with its sand rock formations at the entrance and many travellers visit it annually. In translation from Kyrgyz language Jeti Oguz means Seven Bulls. Before reaching Seven Bulls, there is another mountain called Broken Heart. You can hike up the opposite hill to enjoy the panoramic view of the Seven Bulls. Next stop will be at Bokonbaeva village. This town is the land of eagle-hunters in Kyrgyzstan, here this skill passed from generation to generation.  A local eagle man will tell us more about this type of traditional nomadic hunting. Sometimes one good hunter could provide his village with meat. Arrive to Bishkek and rest in a cozy hotel and finish your tour.

Day 5: Flight
In the morning, our driver and guide will transfer you to the airport.
Main | Uzbekistan | Kyrgyzstan | Kazakhstan | Tajikistan | Turkmenistan | Contact us