With the help of our travel company, tourists will have a chance to take a tour with Kyrgyzstan cars for rent service and discover the rivers of the territory, of which, by the way, there are about 40,000 rivers. In order to travel around the country, you need cars rent Kyrgyzstan service and knowledge of brief information about the most important rivers of the country.

During the tour, guides will tell guests of Kyrgyzstan that if part of the rivers was formed due to melting of glaciers, then the other part was formed due to heavy precipitation. Even with Kyrgyzstan cars for rent service, during the tour, there is no guarantee that you will be able to get to all the rivers of the country, because some of them are located very high in inaccessible places. By the way, travelers are pleased with the possibility that in some rivers of Kyrgyzstan you can go rafting. If you want to include rafting in the tour program, just let our managers know about it.

And so the longest river that tourists can see during the tour with cars rent Kyrgyzstan is the Naryn River, formed by the confluence of two rivers, the Big and Small Naryn. By the way, the length of the Naryn river is 535 km. These two streams form the branches of the At Bashi and Kekemeren, which go to the Toktogul reservoir. The Talas River plays the role of another main river in Kyrgyzstan. The Talas River is also famous for the fact that in 751 on the banks of the river the Chinese were defeated, which led to the end of the Western Expansion. If during the tour with Kyrgyzstan cars for rent service travelers go to the Boom Gorge, they can see the Chui River. On the famous Khan Tengri ridge, you can observe such a river as Sary Jaz, on territory of which wanted to build a bridge in 2003. Nevertheless, the idea with the bridge did not materialize. Travelers with Kyrgyzstan cars for rent service can observe the Chatkal River in the west of the Tien Shan Mountains, which occupies 120 km of the Chandalash ridge. 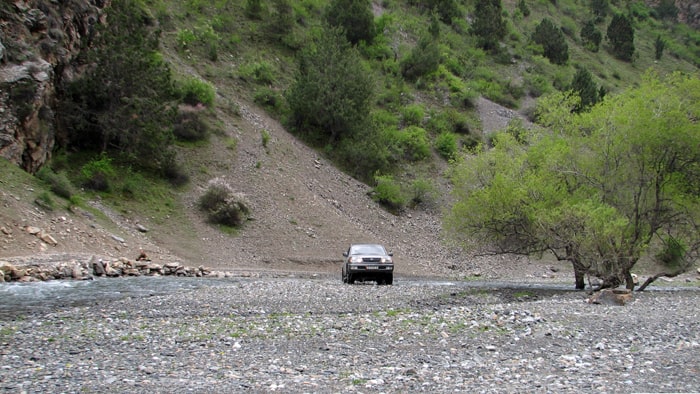